Three against the North 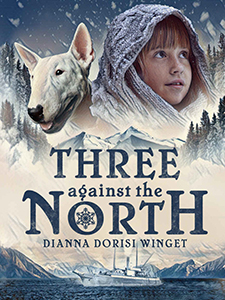 Twelve year old Penny Brighton is so tired of trying to convince her father she doesn't need to be babied just because she's a girl. So when he sends her to Alaska to stay with her uncle during the waning days of the Great Depression, Penny is thrilled with the opportunity to explore the world. But as soon as she reaches Juneau, she's faced with far bigger challenges than she expected—an absent uncle, a new friend, Bitty, who's being forced to undergo barbaric medical treatments destroying her will to live, and a deaf bull terrier with mysterious abilities. When Bitty disappears during a blizzard, Penny faces a life threatening decision. Should she ask for help, or try to rescue Bitty on her own? The reward for success is hard to ignore—it would finally prove once and for all that she's as brave and capable as any boy.

Based on the life of Alaska's famous bull terrier, Patsy Ann, this historical fiction tale is equal parts adventure and a heartwarming story of friendship and true courage. From the author of the William Allen White winner, A Million Ways Home.

Available in both print and ebook: